In an ever-changing world, such as soccer’s, only intelligence may truly help, since, besides being able to act effectively, it is essential to know how to think about the best way to act. Therefore, in the more recent years of modern soccer, the tactical component has been increasingly valued and diffused. Particularly in Brazil, this dimension of sport performance has been studied and applied by many professionals of this field, from the youth academies to professional level.

This book was conceived to help those who devote much of their time to improving the quality of the game, and to training highly enlightened, creative and intelligent players. Hence, this work presents procedures and ideas that, besides assisting in the task of evaluating the tactical performance of soccer players and teams, also allow improving their expression throughout the learning and training phase.

time to soccer and to the people involved in it, who help colouring

the world and making it a better place to live and get along.

Soccer has proved to be an unprecedented phenomenon of social impact, inhabiting a prominent place in the daily lives of millions of human beings, a phenomenon that may be witnessed even in the most remote places of the planet.

On the match stage and behind the scenes of practice and training, the demands of specialization are increasingly greater and more refined, which justifies an increased responsibility and a more accurate competence by all those involved.

The players play the game. The coaches devote their time and energy to improve players and teams’ performances. In turn, match analysts, physiotherapists, psychologists, clinicians and the remaining staff dedicate themselves to optimize resources that help boosting the performance levels of players, teams, coaches, and others.

In this context, practice in youth academies and top-level professional teams has posed continuously different and challenging problems, with respect to the relevance of the training to play according to ideas and playing styles that allow the materialization of these ideas. Therefore, modern training methodologies are incessantly urged to include practices related to representativeness and specificity of the models and conceptions of play, in order to ensure a significant transfer of sport performance, from training to competition, and to make preparation increasingly consistent.

It is clear, therefore, that the progress of soccer depends, more and more, on the need to create and systematize a body of knowledge that supports the evolution of practices. Hence, it seems relevant to study soccer, in its various fields, in order to help understand the constraints that favour or hinder the progress of players, teams and of the game itself. At the same time, it is necessary to spread knowledge, so as to benefit from it.

The authors of this book have devoted a significant part of their academic, professional and personal time to this enthralling team sport and, over the years, have come to realize that there is not only one single “geography of knowledge” in soccer, just as there is no single answer to the questions: How to train? How to play?

Effectively, the richness of soccer seems to lie, largely, in the fact that it can be played, practiced and thought of in plural. Hence we are not in favour of the globalization of training methods, nor the standardization of playing styles. On the contrary, we acknowledge that the different perspectives, training and forms of expression of teams and players, comprise an important asset, so that this sport never ceases to be an art and, as such, remains very much alive and keeps stirring emotions.

This work is a result of the study, practice and reflection of its authors, always taking soccer playing and training in soccer as mottos, and was conceived with the purpose of spreading and sharing a way of prospecting and evaluating the game of soccer, according to logics and principles. From a conceptual organization, several drills are presented and evaluation procedures are suggested, and may be applied to gather information regarding the tactical performance of players and teams.

It should be said, however, that the systematization of conceptions and knowledge presented here should not be outlined as a prescription. On the contrary, they are intended to also constitute a contribution that challenges other ways to see and understand soccer.

We wish to dedicate this book to all those who admit that the act of training with quality is the most influential condition in the improvement of players, teams and in the positive transformation of soccer. 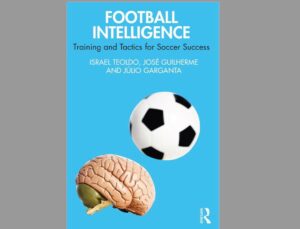